Monasteries visible during the tour

The monastery consecrated to Mary Candlemas is located in the south of the west coast and is built closest to the summit of Mount Athos and at its foothills.

The period of its founding is uncertain, but is believed to be in the 10th century. A connection is made with a monk named Paulos, but it cannot be established exactly who this was. Originally it was probably a Skete Monastery Xiropotamou.

The monastery is dedicated to the birth of St. John the Baptist. It was founded by the monk Dionysius in 1366 based on a divine vision. Initially as a small monastic settlement due to a lack of required funds.

When the Byzantine emperor was later convinced of the need for a large monastery, the construction of the complex began. It has been fifth in the monastery hierarchy since 1574. In the third Typikon of Athos from 1394 it was listed in the fourteenth place, although there were still 25 monasteries on the Holy Mountain at that time.

The monastery dedicated to Saint Nikolaos dates back to the 14th century and is therefore relatively young. It is located on the west coast directly on the water and is one of the smaller of the Athos monasteries.

The monastery, considered to be one of the most colorful buildings on Athos, was founded either by Saint Gregory the Younger or by his teacher, Gregorios the Sinaite. It is mentioned for the first time in a document from 1347. In Typikon from 1394, it is listed 22nd out of 25 monasteries at the time.

The large monastery dedicated to the birth of Christ is somehow reminiscent of Tibetan Lama monasteries due to its construction. It is more than 200 meters above sea level on a rather steep cliff that completely encloses it.

The building has ten floors with a total height of around 40 meters. According to legend, the founder was the Blessed Simon, who is said to have lived as an ascetic on Petra (Byzantine: rock), on which the monastery was later built. When a miraculous light illuminated the rock cone, he interpreted this as a sign to found a monastery at this point. 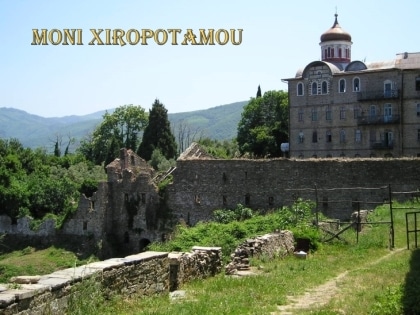 Legend has it that the monastery was founded in the 5th century by the virgin Poulcheria, daughter of the emperor Arcadios.

According to another tradition, its founder in the 9th century was Blessed Pavlos Xeropotamenos, who was an opponent of Saint Athanasios and probably wanted to offer an alternative to the monastery of Megistis Lavra. The most important relic of the monastery, which is consecrated to the 40 martyrs, is said to date from that time: a splinter of the cross of Christ, which Pavlos is said to have received from Emperor Romanos I. in 933.

The monastery, which is also known as “Rossikon” (Russian monastery), was founded by the monk Leontios. As far as we know today, this was at the end of the 10th century, although the year 1030 is also mentioned here and there.

The names of various abbots from the 11th century come from old documents. Why the monastery was abandoned and fell into disrepair in the 12th century is unknown. But Russian monks, who had lived on Mount Athos since the 11th century, were awarded the monastery in 1163. Until then, most of them lived in what was then the “Xylurgou” monastery.

The monastery is located directly on the west coast of the peninsula and was founded around 983. The namesake was the monk and priest Xenophon, who is mentioned in the life of the saints of Athanasios.

Several documents from the years between 998 and 1018 that bear his signature still exist today. He signed those documents at the time as “Xenophon, monk and abbot of the monastery of St. Georgios”. This is the original name of the monastery and it is still consecrated to Saint George to this day.

According to tradition, the monastery is said to have been founded around 950 by Evthimios, a disciple of Saint Athanasios. However, this cannot be proven historically.

In old documents, the northernmost monastery on the west coast is first mentioned around 1030. It is believed that it was founded before 1013. Apparently by a monk known as “Docheiarios” (accounting officer). A Ioannis Docheiarios who worked as such in the nearby monastery of Xiropotamou can in any case be proven for the time in question.